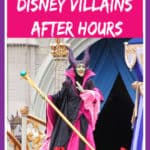 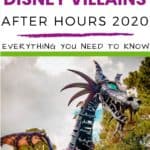 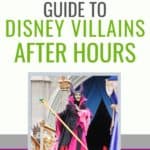 Check out my full guide on everything we know so far about Disney After Hours Boo Bash.

If you’re considering Boo Bash, read through this Disney Villains After Hours post to get a feel for what the Disney After Hours parties offer.

The top 3 dates in bold have party hours from 9:00p until 12:00a. The rest of the party dates will run from 10:00p through 1:00a. Ticket holders are allowed entrance to Magic Kingdom as early as 7:00p. This allows time to get on some rides and enjoy Happily Ever After.

If you are an Annual Passholder or Disney Vacation Club member, you are in luck! You get a $30 discount per ticket, bringing your cost per ticket down to $115 per person.

If you aren’t an Annual Passholder or DVC member, buying them from an authorized Disney ticket seller is the only other way to get a discount.

Wondering What to Wear to Disney Villain’s After Hours?

When going to a party like this, you might as well dress to impress! Amazon has loads of Disney Villain themed shirts and ears to suit just about anyone’s needs.

Here are some of my favorites:

What is Disney After Hours?

Here’s a refresher course on the Disney After Hours event in general. The event is held on scheduled dates only, and begins after the park closes, typically from 10:00p-1:00a. However, guests gain access to the park starting at 7:00p, allowing you to enjoy the fireworks and some rides before the event starts.

There are a limited number of tickets sold (who knows how many) allowing guests to enjoy significantly shorter ride times on top Magic Kingdom attractions like Seven Dwarfs Mine Train and Peter Pan.

Included in Disney After Hours

During the 3 hours of the regular Disney After Hours event, guests have access to more than 25 of the rides. Guests are also provided with complimentary ice cream and popcorn snacks from carts scattered around the park. Bottled beverages are available for free as well.

And just in case those treats aren’t enough to hold you over, limited food selections are available at Main Street Bakery and other select locations around the park.

This year will see a continuation of the same features the party had last year.

Last year Disney stressed this from the get go but didn’t make direct mention of it this year. I anticipate this will remain true this year but I will update if I find otherwise. There will be no Villain meet and greets during the event. This is going to be a major disappointment for guests. Villain meet and greets are rather thin to begin with, and this seems like the ideal setting to add some. I’m sure Disney has their reasons, I just don’t know what they are.

Quite frankly, just the thought of seeing Maleficent in her dragon form roaming the park and breathing fire sounds great to me.

Overall, expect wait times to be minimal, with the lowest wait times towards the end of the night. Seven Dwarfs Mine Train and Space Mountain will have the longest waits, but even that should be around 35-40 minutes.

New for 2020 at Disney Villains After Hours

Disney just announced that addition of the Villains Caravan to Maleficent’s wanderings around the park. Maleficent in her steampunk dragon form wanders through Magic Kingdom twice a nice during Villains After Hours. Now she will be joined with various villains, including Oogie Boogie, Cruella DeVil, Gaston, Captain Hook, & more.

The Disney Parks Blog has released some more information about the all new stage show to be performed during Disney Villains After Dark, called “Villains Unite the Night”. Hades and Meg are the hosts of this show, which is premised around Hades waiting for 5 planets to align, which sets off the prophecy that he can rule the universe.

However, Maleficent, Dr. Facilier, Jafar, and the Evil Queen all seem to think the prophecy is for them and show up to have their say! I’m willing to bet this stage show is really entertaining. The show will run over 20 minutes long and will run 3 times during each party.

DJ in The Hub!

Prior to “Villains Unite the Night”, and I presume after, there will be a DJ on the castle stage energizing the guests with music. The way it is described by Disney Parks Blog, “transforming the entire Central Plaza of the park into a killer club scene”, the DJ has the potential to be a pretty cool experience.

So far, we know that there will be some villain themed overlays in both Space Mountain and Pirates of the Caribbean. These themed enhancements began in 2018 during Mickey’s Not So Scary Halloween Party to mixed opinions. I loved the Space Mountain overlay but was “meh” about the Pirates overlay. It remains to be seen how the Villains overlay will be different.

Disney Parks Blog reports that Space Mountain will be taken over by villains, with a new villainous soundtrack and “the vilest Villains taunting you as you whiz by.” I don’t know about you, but I think that has the potential to be awesome.

All they have said about the Pirates of the Caribbean ride enhancements is there will be live “scalawags” present within the ride in search of treasure. I think this has the potential to be cool, but they need to execute this much better than they did during MNSSHP in order to achieve that.

Below you can find the food guide from the 2019 Villains After Hours party. Disney has not released information about the special food offerings for 2020. I will update with pictures as soon as it’s released. But for inspiration take a look at last year to whet your appetite!

Some of these treats are repeats from last year’s Mickey’s Not So Scary Halloween Party, which seems fitting since it’s the same kind of theme. Below you will find pictures and brief descriptions courtesy of Disney Parks Blog.

Those of us who are gluten free might be out of luck with the majority of these treats, but everyone else has a wide variety of treats to choose from.

As a reminder, during the Disney Villain’s night party, you are provided free, unlimited access to ice cream novelty items, popcorn, and select bottled beverages.

Disney has begun to release information about the special treats to be found during that 2020 Disney Villains After Hours parties. This list is significantly smaller than last year’s exclusive food list. There was no mention made of these being in addition to last year’s treats. Perhaps they had too many options last year and they didn’t sell well enough?

If you are at the party and see more than just these three options, please let me know in the comments below.

5 Dozen Eggs Slushy at Gaston’s Tavern: A frozen custard with brown sugar topped with whipped cream and a cinnamon stick.

Body Language at Storybook Treats: A cookies and cream mousse with chocolate cake, glaçage, and meringue tentacles garnished with a chocolate shell.

Merchandise options include several different tank and t-shirt styles, including one zip up option. Another item that is sure to be popular is the Oogie Boogie light up tumbler. Personally, I’m a fan of the poison apple candle holder…

Note that the last item shown, the blue t-shirt is exclusive for Annual Passholders. That appears to be the only Passholder exclusive item. If you see something else at the party, please let me know! I would love to add the information.

The Villain’s After Hours party was a huge hit last summer so it’s no surprise that they expanded the offerings this year. And Disney does nothing by halves. They expanded it a whole lot. I think this is a good thing as it allows more people to experience this fun and unique party.

If you’re trip falls when one of the Villain’s After Hours parties of offered, and it fits in your budget, you should absolutely go. What a unique opportunity to tell your friends and family about!

What do you think? Is this a worthwhile event to attend? Would you book yourself a short notice trip for some villainous fun? Let me know below. Don’t forget to follow The Disney Journey on Pinterest and Facebook.

6 thoughts on “Guide to Disney Villains After Hours”

This website uses cookies to improve your experience while you navigate through the website. Out of these cookies, the cookies that are categorized as necessary are stored on your browser as they are essential for the working of basic functionalities of the website. We also use third-party cookies that help us analyze and understand how you use this website. These cookies will be stored in your browser only with your consent. You also have the option to opt-out of these cookies. But opting out of some of these cookies may have an effect on your browsing experience.
Necessary Always Enabled
Necessary cookies are absolutely essential for the website to function properly. This category only includes cookies that ensures basic functionalities and security features of the website. These cookies do not store any personal information.
Non-necessary
Any cookies that may not be particularly necessary for the website to function and is used specifically to collect user personal data via analytics, ads, other embedded contents are termed as non-necessary cookies. It is mandatory to procure user consent prior to running these cookies on your website.
SAVE & ACCEPT
782 shares