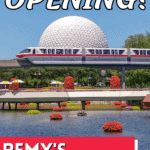 After a very long wait, Disney finally announced the grand opening details for Remy’s Ratatouille Adventure. It feels like we’ve been waiting forever for this ride to open (because we actually have…).

The latest news release included plans for how to ride Remy’s Ratatouille Adventure on opening day, and beyond (updated August 19, 2021).

What is Remy’s Ratatouille Adventure?

First things first, what exactly is Remy’s Ratatouille Adventure? Well, Remy’s is the newest ride to open up at Epcot. The concept of the ride is based off of the Disney movie “Ratatouille”.

Considering that the movie itself takes place in France, the ride is appropriately located in the France Pavilion.

The concept of the ride is that guests shrink down to the size of the movie’s star, Remy himself. You are then skurrying through Gusteau’s restaurant on a wild adventure for the whole family.

Yes, the whole family! There is no height requirement for the ride.

Remy’s Ratatouille Adventure is the newest Disney ride that uses a trackless ride system. The other new rides with this technology are Rise of the Resistance and Mickey and Minnie’s Runaway Railway, both at Hollywood Studios.

The ride car is actually in the shape of a rat!

Just because they made the announcement, it doesn’t mean the ride is opening up soon. Disney announced that Remy’s Ratatouille Adventure will open up on October 1, 2021.

Coincidentally (or not), that is also the kickoff of Disney’s 50th Anniversary celebration. This makes sense in a lot of ways.

First, Remy’s has actually been ready to open for quite some time. It was close to being finished before lockdown even happened. However, Disney has no desire to debut a new ride during the current state of things.

Ride grand openings at Disney draw huge crowds, and now simply isn’t a good time for that. By waiting until the fall, Disney is banking on the vaccine getting fully rolled out in the meantime.

This should allow Disney to increase capacity even more, that way they can get even more bang for their buck.

Second, with so many things delayed that were supposed to be ready for the 50th Anniversary, Disney needs something special to unveil. With no word on the possibility of either Tron or Guardians of the Galaxy: Cosmic Rewind opening, Remy’s is the winner.

Buried within the release of the new Disney Genie app and the announcement there will be no more free FastPass system, was the news that Remy’s will have no standby line.

That’s right, get ready to have some virtual queue fun in order to get on Remy’s Ratatouille Adventure! The virtual queue is limited and subject to availability.

I’m hoping to God that the sequence doesn’t change once they move over to Disney Genie.

The times are also the same. The first boarding pass drop happens at 7:00a. You can access the system from anywhere, you don’t need to physically be at Epcot.

You do however need to have a valid park ticket linked to your My Disney Experience, along with a Park Pass Reservation for Epcot for that day.

If you aren’t successful during the first window, you can try again at 1:00p.

The theory right now is that this virtual queue will be much more successful than Rise of the Resistance. Don’t get me wrong, it will still fill up in seconds as soon as the window opens. At least for the first several months.

But capacity for Remy’s is much higher, and the ride is more efficient. Therefore, there should be a higher number of boarding groups that are available in the first place.

Remy’s Ratatouille Adventure isn’t the only thing that’s opening up in the France Pavilion on October 1. The entire France Pavilion has an expansion that houses not just Remy’s, but also a new restaurant called La Creperie de Paris.

As someone who has to eat gluten free, I’m incredibly excited that not only are there gluten free items already on the menu, but there’s hard cider! I only hope they also serve gluten sweet crepes because I LOVE sweet crepes.

I’m pretty excited at the prospect of another ride at Epcot, just in general. After the success of the other new rides which recently opened in the past couple of years, I’m optimistic that this ride will also be a fun one.

I’ve been in the small part of the France Pavilion expansion that is already open, and it’s got such a nice feel. Once again, the attention to detail of the Disney Imagineers is amazing.

And I’m always up for a fun new restaurant!

What about you? Are you looking forward to taking a spin on Remy’s Ratatouille Adventure? Let me know in the comments below.

This website uses cookies to improve your experience while you navigate through the website. Out of these cookies, the cookies that are categorized as necessary are stored on your browser as they are essential for the working of basic functionalities of the website. We also use third-party cookies that help us analyze and understand how you use this website. These cookies will be stored in your browser only with your consent. You also have the option to opt-out of these cookies. But opting out of some of these cookies may have an effect on your browsing experience.
Necessary Always Enabled
Necessary cookies are absolutely essential for the website to function properly. This category only includes cookies that ensures basic functionalities and security features of the website. These cookies do not store any personal information.
Non-necessary
Any cookies that may not be particularly necessary for the website to function and is used specifically to collect user personal data via analytics, ads, other embedded contents are termed as non-necessary cookies. It is mandatory to procure user consent prior to running these cookies on your website.
SAVE & ACCEPT
279 shares