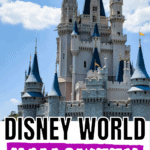 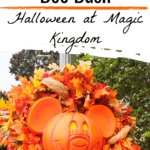 Once Disney announced a Halfway to Halloween celebration, everyone eagerly awaited an announcement for Mickey’s Not So Scary Halloween Party. However, Disney After Hours Boo Bash was announced instead (updated 8/10/2021).

Disney After Hours Boo Bash is essentially the replacement for Mickey’s Not So Scary Halloween Party in 2021. The event will be held at Magic Kingdom.

I definitely don’t think this is a bad thing, in fact, it’s a good thing. Let’s take a look at the details we know so far and explore the difference between the new Boo Bash, Mickey’s Not So Scary Halloween Party, and the Disney Villains After Hours event.

Disney After Hours Boo Bash will run on select nights from August 10 through October 31, 2021. Here is the list of dates.

**Disney ended up adding dates after the event proved to be so popular. Most of the dates in October are sold out already. If this is an event you want to attend, book your tickets sooner rather than later.

Originally, the event was mainly scheduled for Tuesdays and Fridays. However, they’ve now added quite a few Sunday dates as well.

Also, you’ll note there are no parties in and around the official start date of the 50th Anniversary celebration.

All guests with Disney After Hours Boo Bash tickets are allowed to enter Magic Kingdom at 7:00p and are not required to have a Park Pass to enter.

The prices are currently available in a price range, and the price goes up the closer you get to Halloween.

And last but not least, to attend on Halloween night, tickets are $199 plus tax.

Annual Passholders and Disney Vacation Club members can get a $10 discount for event nights in August and September only.

I’m not going to lie, these prices are steep. Too steep. However, people are willing to pay them, clearly. Considering how much money Disney World has lost in the past year and a half, these prices are not surprising.

The events at Boo Bash strongly mimic a combination of those found at both Mickey’s Not So Scary Halloween Party and Disney Villains After Hours.

Just like Mickey’s Not So Scary Halloween Party, guests are encouraged to come in costume. However, make sure you follow Disney’s dress code and costume guidelines.

Noticeably missing from these events: parade, stage shows, and fireworks. It could be that by the time Boo Bash rolls around, we’ve seen the return of at least some of these things in general.

However, Disney has planned this event based on the possibility they haven’t yet returned.

Disney provided more details on the character cavalcades to expect during Boo Bash.

I expect character appearances during Boo Bash to be similar to how characters have appeared since reopening. This means that characters will be stationed throughout Magic Kingdom, allowing guests to see them at a distance.

Popular places in Magic Kingdom for characters to appear are the Main Street train station, porch of Crystal Palace, balcony at Country Bears Jamboree, and anywhere else they come up with.

Disney specifically identified appearances by Dr. Facilier, Captain Barbosa, Goofy, and Chip ‘n’ Dale. I would expect more characters than this, with an emphasis on the villains.

Also, Miss Carlotta, Miss Renatta, and Broome the Butler will be located at the Haunted Mansion.

I also expect, based on the video Disney released, that the Fab Five and their friends will dress in Halloween costumes.

Aside from that, this video tells us nothing…

As with any Disney World event, special snacks will be prevalent. We don’t know much yet about the specifics, but here’s what we know so far.

Like the other Disney After Hours events, select food and beverage items are included in your ticket cost. These include ice cream novelties, popcorn, and select beverages.

Like Mickey’s Not So Scary Halloween Party, there will be treat stations around the park to allow guests to do some trick or treating.

And of course, expect several Instagrammable specialty snacks and drinks. So far, Disney has whet our appetites with these specialty treats:

Unfortunately for all of us, the specialty treats cost extra. And for those who don’t plan to go to the party, these treats will be on sale during regular park hours from October 1 through November 1.

All of the Disney After Hours events held in 2019 and 2020 were praised for the lack of crowds and wait times. In fact, that was one of the largest draws for the events.

Clearly, with everything still going on, limiting capacity for special events is important. It could be that as the events get closer and they have a better feeling for the current situation of the virus that they release more capacity, but I hope not.

In fact, the crowds are so low, that it was not uncommon to get on all of the rides you wanted during the 5 hours (2 pre-party and 3 party) event guests were allowed in the park.

And this was with minimal wait. Many people reported waiting no more than 20 minutes for any ride.

Some other similarities between Disney Villains After Hours and what we know about Boo Bash so far? Cavalcades, character appearances, themed music and lighting.

One aspect about the Disney After Hours parties that was a huge draw was the inclusion of free popcorn, ice cream, and bottled beverages.

We don’t yet know whether this will be part of Disney After Hours Boo Bash. I’m making the prediction that they won’t be. I think Disney will consider the treat stations as enough free food for the guests.

Disney confirmed that ice cream novelties, popcorn, and select beverages will be included in the cost of the event!

I think the overall framework of Boo Bash is modeled after Disney After Hours instead of Mickey’s Not So Scary Halloween Party. The After Hours events just fit better with today’s requirements.

If you want, ready a more in depth analysis of Disney Villains After Hours to get a clearer idea of what Boo Bash COULD look like.

The two biggest similarities are the encouragement to dress in costume and the treat stations. These two things are hallmarks of Mickey’s Not So Scary Halloween Party.

The treat stations are always pretty fun, and you can typically end up with MASSIVE amounts of candy. Like more candy than a classroom of kids should eat.

Being able to dress in costume is another huge deal that’s pretty unique to Mickey’s Not So Scary Halloween Party. While Disney bounding is always popular, that is not quite the same as a grown adult showing up in a full on Halloween costume.

And man, people really do go all out with some pretty amazing costumes. I’m happy that this particular aspect of MNSSHP is possible during Disney After Hours Boo Bash.

Differences Between the Two

There are a few key differences between Boo Bash and MNSSHP. Not surprisingly, they are the parts of the party the encourage mass gatherings and up close contact with other people.

Unfortunately for us, the lack of these three things is a huge loss. While I’m personally not into character meet and greets, a lot of people are.

For me, the loss of the Boo to You parade is massive. It just so happens that that particular parade is my favorite out of all of them. I’m hoping that my favorite parts of the parade show up in the cavalcades.

Similarly, the Hocus Pocus Villain Spelltacular is considered one of the best, if not THE best, stage show. But as they simply don’t want people congregating in The Hub shoulder to shoulder, this just isn’t possible yet.

And finally, there’s still a moratorium on fireworks shows at Disney World. I am hopeful that they’ll return sooner rather than later, and might even be back at the parks by fall.

However, even if this happens, I wouldn’t expect a special fireworks show to pop up at Disney After Hours Boo Bash at the last minute. But maybe I’ll be surprised.

Again, get more information about Mickey’s Not So Scary Halloween Party as it usually looks to begin to get an idea of what to expect at Boo Bash.

Similarities Between the Three Parties

I think this comes as a shock to no one, but you can expect special party merchandise and food to be available at Disney After Hours Boo Bash.

This is something in common with both Mickey’s Not So Scary Halloween Party and Disney Villains After Hours.

Disney World is known for having special themed treats and merchandise for any reason they can come up with. So of course they’ll have them for Boo Bash.

Anything to encourage people to part with even more money.

Overall, I’m simply pleased that this is a step in the right direction for a return to normalcy. While Universal Studios went straight to a close to normal Halloween Horror Nights, Disney has a more conservative approach.

This isn’t a surprise as that’s been the case all along.

In the end, I think Disney After Hours will be a lot of fun for guests. The lines will be short, capacity rather severely limited, and treat stations with lots of sugar abound.

Considering how starved everyone is for special events to return in general, this should appease many. I recognize that die hard Mickey’s Not So Scary Halloween Party fans are disappointed. Hopefully, MNSSHP can return in all it’s glory in 2022.

It simply wasn’t possible this year. Aside from pandemic protocols still in place, Disney’s 50th Anniversary Celebration this fall also puts a bit of a damper on a full scale Halloween party.

Since the celebration begins on October 1, 2021, right in the heart of Halloween season, the crowds generated for that just don’t mix well with the typical structure of MNSSHP.

The parties notoriously cause crowd issues at Magic Kingdom on non-party days. Like, major crowd issues. Now add those crowds to all the people flocking to Magic Kingdom for the anniversary, and you see it just doesn’t mix.

I anticipate much fewer dates for Disney After Hours Boo Bash than we typically see for MNSSHP. That will ease some of the difficulty with the non-party day crowds. That, and day guests won’t have to leave the park early like they did for MNSSHP.

What do you think of this announcement? Are you content with Disney After Hours Boo Bash, or do you wish Mickey’s Not So Scary Halloween Party would return? Let me know in the comments below.

This website uses cookies to improve your experience while you navigate through the website. Out of these cookies, the cookies that are categorized as necessary are stored on your browser as they are essential for the working of basic functionalities of the website. We also use third-party cookies that help us analyze and understand how you use this website. These cookies will be stored in your browser only with your consent. You also have the option to opt-out of these cookies. But opting out of some of these cookies may have an effect on your browsing experience.
Necessary Always Enabled
Necessary cookies are absolutely essential for the website to function properly. This category only includes cookies that ensures basic functionalities and security features of the website. These cookies do not store any personal information.
Non-necessary
Any cookies that may not be particularly necessary for the website to function and is used specifically to collect user personal data via analytics, ads, other embedded contents are termed as non-necessary cookies. It is mandatory to procure user consent prior to running these cookies on your website.
SAVE & ACCEPT
57 shares